I search my heart and mind trying to find the words for what I experienced as I first absorbed India.   Yet it can not be so easily defined; so I’ll just tell it as a story.

Landing at the Delhi airport was not exactly what I had anticipated, but most of that was pleasant.  Kevin had described taxi drivers closing in on us like animals hunting prey, offering us rides while we were mobbed by overwhelming pollution, and desperate people begging.  Instead we walked out to moderately controlled chaos.  A bunch of drivers waved signs, held back from us by a metal rail.  The taxis waited behind the drivers. We peered at them; I imagined trying to get to one and get out as painlessly as possible.

We headed over to a man bearing a sign with name of our hotel.  After a few phone calls where it became clear that the hotel did not seem to be aware of our reservations, it was decided we could go in the car.  A few seconds later a Mexican couple arrived, and we shook hands and introduced ourselves. 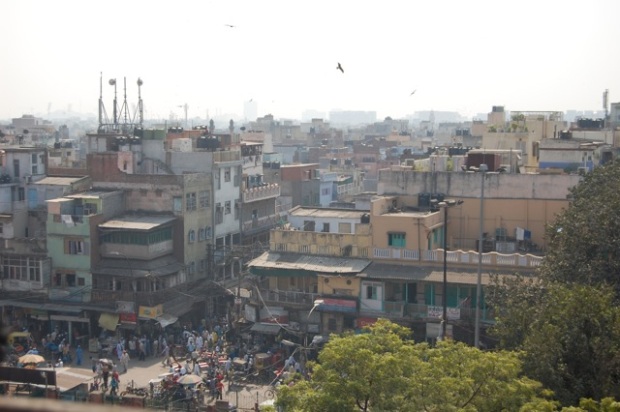 We all headed to the parking lot and clamored into the car together.  Horns blared loudly as we headed onto the crowded Delhi freeway.   A giant castrated bull attached to a man on wheels rumbled by.  Our driver quickly passed them and made his way weaving in and out of traffic in a jerky, intrusive sort of way.  Motorcycles whizzed past, carrying a entire families on their backs: father driving, mother sitting behind him with both feet flung over one side, one, two, or three children across her lap or on the end, and no helmet in sight.  The roads didn’t seem to have clear lanes, or traffic regulations.  What few lights there were, people seemed to treat them more like potential stop signs.  All sorts of vehicles roamed the streets: trucks and buses, to bicycle rickshaws, to three wheeled something or others, to little cars, and auto rickshaws and apparently a whole bunch of creative transportation I had yet to see.  I exchanged looks of horror with our newfound Mexican friends.

We drove down a street crammed with shoddily constructed stores, up to the front of our hotel.  Five men in uniforms approached and all vied for our bags.  I felt funny letting our luggage leave my sight, but they plopped our bags in the front of the hotel next to an overcrowded counter where we stood waiting to talk about our reservation.  A pungent odor filled the air, and was quickly starting to give me a headache.  I glanced at the accommodations nervously.   The walls were a dingy cream, but not overtly unclean.  The décor was older, but not falling apart.  The place wasn’t great, but it wasn’t horrific, except that smell.  And it was India; I didn’t really have a basis of comparison for hotel quality yet.

The man behind the counter looked confused as he determined they didn’t have any record of our accommodation. He left the room.  Then he came back.  He shuffled the papers around for a while.  I started to get images of us getting tossed out onto the street, exhausted and jet lagged after our fifteen hour flight, doomed to search the streets of Delhi for a new hotel.

“Okay.  I will need to make copies of your passports.” He finally said.

I stared at Kevin in awe as he handed over both our passports.  Other countries I’ve been to have insisted that one of the most important things to do is to protect your passport, keep it on you at all times so no one can steal it or get a hold of your information.  It’s the entire justification for buying those thin fanny packs you wear under your clothes.  I’ve even heard people sell American passports for thousands of dollars on the black market.  Now I was supposed to let some random guy in a hotel in India make copies of mine?

Kevin caught my distressed look. “That’s common here.  They do it in every hotel.  Government policy.  It’s completely insane and unnecessary, but it’s the stupid red tape. You got to do it.”  This was Kevin’s second trip to India, and not much was surprising him.

The man handed Kevin the long, flat book laid out on the counter before us, “Fill this out please.”

I gaped again at the lined pages.  It had been filled out many times before, by people from all over the world.

“Where we came from… where we are going to, what are addresses are, and how long we will be in India.   Why could they possibly need all that information?” I asked.
“Government red tape,” Kevin replied.  “I don’t think anybody ever even looks at it.  Get used to it, you have to do it in every hotel in India.”

“Do you need me to fill it out too?” I asked the hotel clerk.

“Yes, mam,” he nodded and as I started in on the form he finished doing some math, “That will be seven thousand rupees.”

“Seven thousand rupees for two nights?” Kevin retorted, ”But the Internet said sixty-three dollars an night. That’s less than that.”  Kevin pointed at our reservation.

“Yes, but there are taxes.” The man said.

I stopped writing to shake my head, “No.  The Internet said taxes included.  See. It says it right here.”

“Okay well… “ The man typed some more numbers into a calculator.  “That will be six thousand rupees.”

Lives Where He Works (note the bed)

© Krista Keenan and 3 Months in India, [2008-2010]. Unauthorized use and/or duplication of this material without express and written permission from this blog’s author and/or owner is strictly prohibited.